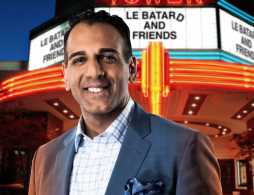 The emerging content company, which launched in January, will add Virk as a regular contributor starting in July. Le Batard was a popular host of Highly Questionable and Skipper had a nearly three-decade tenure at ESPN, including six years as president.

ESPN fired Virk, who had been on the rise at the network, in 2019. Reports at the time indicated that he had been accused of leaking confidential information to the media on more than one occasion. Virk denied the charges and later agreed with ESPN that both parties would abandon plans to sue each other in order for Virk to be let out of his contract.

Along with his lengthy sports career, which has also included stints at Canada’s TSN and, more recently, DAZN, MLB Network and NHL Network, Virk also hosts the weekly Cinephile podcast. Meadowlark’s announcement of his hiring anointed him as such, and said the podcast will move to the Le Batard & Friends network. In addition to hosting Highly Questionable, Le Batard also developed a sizable following on the radio and on podcasts which has carried over to the new venture. Virk plans to appear on The Dan Le Batard Show with Stugotz and take part in Meadowlark projects.

The company has already slated a podcast featuring Hank Azaria reprising the title character from IFC series Brockmire. It has also recruited another ESPN alum, Jemele Hill, as a creative advisor along with prolific TV producer Mike Shur. Over time, it intends to branch out from sports into other areas and across media platforms and has raised more than $12 million in venture funding to support those ambitions. Investors include DAZN, which Skipper led as executive chairman after leaving ESPN, is among.

“I’ve had the amazing fortune to have John Skipper as my boss at ESPN, DAZN and now Meadowlark,” said Virk. “Clearly the third time is the charm and I’ve long enjoyed John’s ambition, erudition and sense of humor.”

Skipper called Virk “a unique talent – the kind of broadcaster who can thrive in any sport and in any environment.”