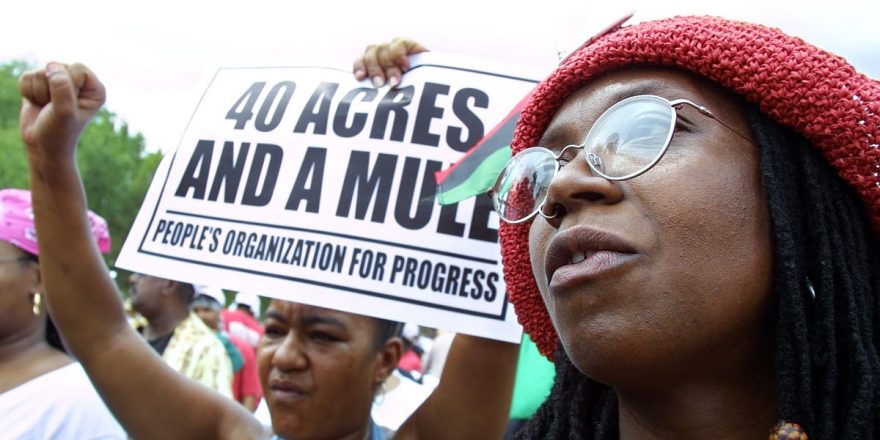 In 1865, 400,000 acres of Confederate land were confiscated and set aside for freed slaves; each Black family expected to receive approximately 40 acres. But the federal government never fulfilled that promise. Instead, at the end of the Civil War, many slave owners received cash reparations for each previously enslaved person who was set free — and the former slaves saw nothing.

Since then, conversations about reparations for Black Americans have been ongoing, but little to no progress had been made until recently. This year, however, the city of Evanston, Illinois, issued reparations to descendants of the formerly enslaved, and a federal House committee approved a bill to study reparations for the first time since the bill was introduced in 1989.

Reparations represent an opportunity to close the racial wealth gap. By providing cash and other financial incentives to Black Americans that have for too long been denied, the United States can begin to reverse the damage of centuries of systemic racism.

Beyond slavery, discriminatory practices have prevented most Black Americans from building wealth for generations. From Jim Crow, redlining, and mass incarceration to the destruction of prominent Black neighborhoods and Black residents’ massacres by white supremacists like we’ve seen in Tulsa, Oklahoma, or Rosewood, Florida, the list of systemic roadblocks is extensive.

Last year, the pandemic highlighted racial disparities resulting from hundreds of years of slavery and systemic racism. The racial wealth gap continues to grow, with white families having 10 times the wealth of Black families. According to a recent study, the median net worth of Black families is on track to go down to zero by 2053.

Lamell McMorris, the founder of Greenlining Realty USA, a real estate development firm aimed at redressing the effects of redlining, and a lifelong advocate of civil, economic, and social rights, says it’s past time to unravel the effects of systemic racism. “As a nation, we should confront the history and systemic devastation and racism that has been targeted towards Black people in America and put the resources necessary to atone for that,” says McMorris.

How reparations can begin to close the racial wealth gap

If the past year’s stimulus checks showed us anything, it’s that cash in hand can go a long way to lifting people out of poverty. Cash reparations can arguably do the same.

There have been countless studies estimating the cost of the systemic injustice endured by descendants of enslaved Africans in the United States. In “The Black Tax: The Cost of Being Black in America,” author Shawn Rochester estimates the cost at $70 trillion.

According to a 2020 Reuters poll, only one in five Americans believe that the United States should use taxpayers’ money to pay reparations to Black Americans. But there are other creative ways to cover the cost, such as selling federal land or taxing corporations that profited from slavery. The city of Evanston, Illinois, the first city to pay reparations to Black residents, is using revenue from local cannabis tax to fund it.

Lawrence Delva-Gonzalez, a financial literacy educator focused on educating underserved communities, says that school funding for pre-K to grade 12 should be divided equally at the state or national level. “With the current social class-based structure, some schools look like Disneyland while other schools are barely sparing a dime for leaks, broken windows, and other facility issues,” he says.

Reparations could take the form of more equitable education funding from pre-K to 12, increased funding of Historically Black Colleges, and student debt forgiveness. All could give students a better chance at success.

However, “We have to think of education inclusively, as opposed to a one-stop shop. The reality is that many descendants of those enslaved are disproportionately affected by subpar K-12 public education. As a result, many Black children are either not prepared or interested in pursuing traditional education.  So we have to include nontraditional education as well,” says Ayesha Bell Hardaway, assistant professor of law and co-director of the Social Justice Institute at Case Western Reserve University.

She adds, “Any form of reparations tied solely to traditional higher education would fail to fully address the educational gap initiated during slavery and exacerbated by continued racial discrimination. Reparatiation paid to those interested in pursuing trade school certifications or vocational training should also be included in any reparations model tied to education.”

Homeownership is one of the primary tools families use to build generational wealth. However, according to the US Census, only 44% of Black families are homeowners compared to 77% of white families. Offering programs to facilitate access to fair mortgage loans or interest-free government loans can help bridge the gap.

In addition to a better path to homeownership , providing housing for nonviolent offenders who have served a jail sentence should  be included in the reparations discussions.

Black people are 3.64 times more likely to go to jail for a similar crime than white people. “After working for the government while in jail for close to nothing, upon release, nonviolent offenders should have access to housing in a nice neighborhood that doesn’t create another form of segregated community,” says Hardaway. “The government should create a better path to reenter society for people who have served jail sentences, especially for nonviolent marijuana-related charges.”

Reducing barriers when it comes to business funding and increasing grants to support Black entrepreneurs can help close the funding and business-ownership gap.

The marijuana industry also provides an opportunity for reparations to descendants of enslaved Americans. With an increasing number of states legalizing marijuana and the conversation to decriminalize it happening at the federal level, reparations in that industry can reverse some of the damage mass incarceration caused for many Black families.

According to the Pew Research Center, Black people represent 12% of the US population and make up 33% of the prison population. In addition, Black people are 3.6 times more likely to be arrested for marijuana-related charges even though white and Black people consume marijuana at roughly the same rate.

“Because of the stigma of being labeled a felon, many Black people lost the opportunity to get an education, a job, or other opportunities,” says McMorris. “Today, marijuana is a multi-billion-dollar industry. Americans previously incarcerated for marijuana charges should be the first in line to get licenses in those states. They should be provided resources to participate in this business that is now legal in several states.”

In her book “State of Emergency,” Tamika Mallory, an activist and modern-day Civil Rights movement leader, writes, “Righteousness and justice should finally be served to the Black community who has never quite recovered from the free labor that our ancestors were forced to give. Empower us with finances that can lift us out of poverty and begin the first page of a new history for America.”

It is long past time for reparations.