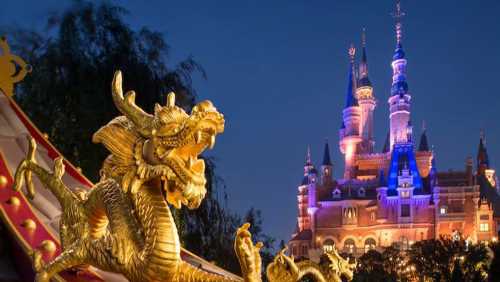 One woman who visited Shanghai Disneyland on Saturday either later tested positive for Covid or came into contact with someone who had it, according to reports. As a result, more than 30,000 visitors were locked in the park Sunday by Chinese government officials and forced to test negative before they were allowed to leave. According to AP “all 33,863 people who had been at the park” did indeed test negative.

The Shanghai property would remain closed on Monday and Tuesday at the very least, according to a statement from park officials obtained by AP. Shanghai Disneyland told the WSJ “it would refund tickets and notify guests as soon as there was a confirmed date for resumption of activities.”

Disney’s parks and resorts division swung to the black last quarter in a slow turnaround for one of the entertainment sectors hardest hit by the global pandemic. Parks posted an operating profit of $365 million for the fiscal third quarter ending in June from a loss of close to $1.9 billion the year earlier. Revenue jumped to $4.3 billion from just over $1 billion. But the global shocks from the pandemic are far from over, especially in China.

The Disneyland lockdown the latest in a string of increasingly strict measures taken by the government. The policies include requiring visitors to quarantine for three weeks upon arrival, requiring those in a hospital to stay another two weeks after recovery and holding ships at port until all crew are tested, according to the the Wall Street Journal.

Deadline reported yesterday that 14 of the country’s provinces are currently affected and the measures are impacting other areas in entertainment, such as exhibition. The highly anticipated Bond outing No Time to Die opened slightly lower than projections this past weekend amid cinema closures in Beijing.

The Shanghai Disney lockdown and other so-called “zero Covid” measures come as China, a country of over a billion people, recorded just 48 cases on Saturday, up from 43 the Monday before. By comparison the home of the original Disneyland, California, has roughly 40 million residents and recorded 6,000-plus daily cases over the weekend.

Beyond sheer social stability — always a prime consideration in the Middle Kingdom — the prospect of Xi Jinping’s confirmation for a third term as leader of the Communist Party next year as well as the global spotlight of the 2022 Winter Olympics in Beijing are motivating factors in the desire to control the virus.

Jill Goldsmith contributed to this report.