Home » 23 Republican governors are refusing to extend pandemic unemployment benefits. An economist explains why that's terrible for the economy. 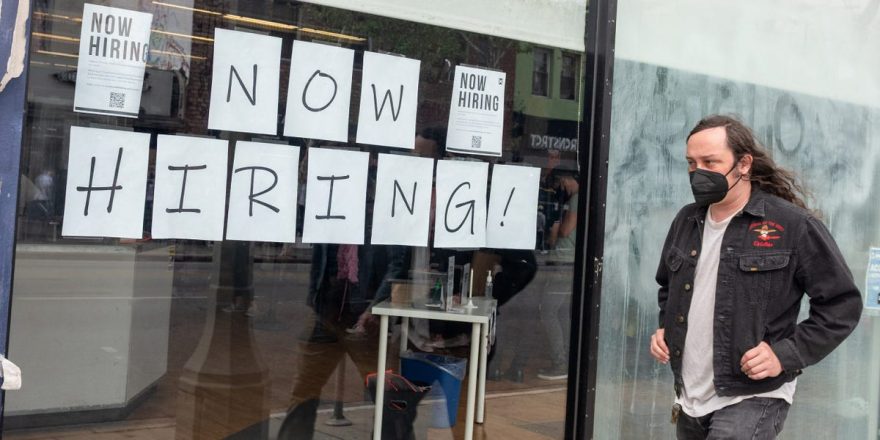 23 Republican governors are refusing to extend pandemic unemployment benefits. An economist explains why that's terrible for the economy.

According to Google Trends, searches including the words “labor shortage” have skyrocketed in the United States over the past month. The term first began to spread on social media in April, when people shared photos of handmade signs at fast food restaurants apologizing for slow service and complaining that “no one wants to work anymore.” Those signs inspired a spate of news stories investigating the so-called labor shortage, and then Republican governors of 23 states used those stories as an excuse to end the additional $300 per week unemployment insurance that Congress enacted to help laid-off workers through the pandemic.

Why would an elected leader choose to make it harder for people to survive when the economy is still reeling from a global pandemic? Arkansas Governor Asa Hutchinson gestured toward the labor shortage, saying that “employees are as scarce today as jobs were a year ago,” and explaining that he was cutting the additional payments because “we need Arkansans back on the job so that we can get our economy back to full speed.”

This labor shortage story is only the latest iteration in an ongoing narrative battle against the social safety net. For 40 years, trickle-down leaders have claimed that programs like TANF, unemployment, and welfare make people reliant on government programs and less likely to participate in the economy. Most economic studies don’t back up those claims. As CNN reported, “Economists at the University of Chicago and Yale University, among others, found that last year’s $600 federal supplement to unemployment benefits had little to no impact on laid-off workers’ decisions.”

So what are Republican leaders talking about when they complain about the labor shortage? First, it’s important to understand that they’re not using it as a technical economic term. “There’s no index of labor shortages that [the US Bureau of Labor Statistics] puts out,” Heidi Shierholz, the senior economist and director of policy at the Economic Policy Institute, explained in the latest episode of “Pitchfork Economics.”

“The key footprint of a labor shortage in the data is very fast wage growth,” Shierholz explained. “The idea behind that is really straightforward: If an employer can’t attract the workers they need, they will raise wages to poach workers from other employers, who will in turn raise wages to retain their workers, and on and on.”

So is there a labor shortage in our economy? And, if so, should we panic?  “While we are not, right now, seeing widespread labor shortages, I do think that the data are indeed flashing labor shortages in very isolated sectors,” Shierholz said. In particular, “it’s pretty much just leisure and hospitality — the sector that has restaurants in it. It’s the lowest-wage major sector in our economy, and that’s where we are seeing some evidence of labor shortages.”

Those Republican governors have it completely backwards: it’s not a labor shortage so much as a wage shortage. People are willing to work, as long as employers pay them the wages they deserve. And those wages have a lot of room to grow: “Wages in leisure and hospitality plummeted at the start of [the pandemic] and stayed very, very low,” Shierholz said. “In the last couple of months, wages in leisure and hospitality have only just regained their pre-COVID trend. So right now, they’re roughly where they would be if COVID had never happened.”

None of this is cause for economic alarm — in fact, it’s not even a crisis in the leisure and hospitality sector, which outperformed every other sector in April’s lackluster jobs report, adding 331,000 jobs in a single month.

Shierholz says that the steep rise in employment in leisure and hospitality, in conjunction with the higher wages in that sector, proves that employers “really did have to raise wages to attract workers. But when they did that, they were able to attract workers. Those labor shortages weren’t impinging on their ability to hire workers. They raised wages and they got the workers that they needed. Employment growth was as expected in that sector.”

In other words, Shierholz said,  “If you need more workers, you raise wages, and you get more workers.”

So what does Shierholz say to the Republican governors who are cutting the $300 additional weekly unemployment benefits in 23 states? “It makes zero sense. It is terrible economics,” she said, flatly.

“It’s cruel, first of all,” Shierholz continued. “There’s millions of people who will have their benefits cut off while they either can’t find a job or can’t work because of things like care responsibilities as a result of COVID, or serious, legitimate health concerns about COVID.”

“But then it’s also just terrible for the overall economy, because those benefits are supporting the spending of those workers,” Shierholz said. Those extra unemployment payments were coming from the federal government with no strings attached, and people were then immediately spending that money in their communities.

“We know consumption is 70% of our economy,” Shierholz said, which means those unemployment benefits represented a huge injection of cash. “Turning that down when we still have a big demand shortfall is just terrible economics. It’s hard to think of a worse decision that a governor can make at this point.”

In the long run, the additional unemployment payments are making a great case for expanding the social safety net in general.

That $300 per week “is giving workers a little bit of room to not be so desperate that they have no choice but to take a job, no matter how poorly it pays,” Shierholz said.

Exploitative employers might not like having to offer more pay and improve workplace conditions, but that’s how a free market is supposed to work. The additional payments, Shierholz concluded, are “actually making the labor market run more efficiently by balancing the power out a little bit between workers and employers.”