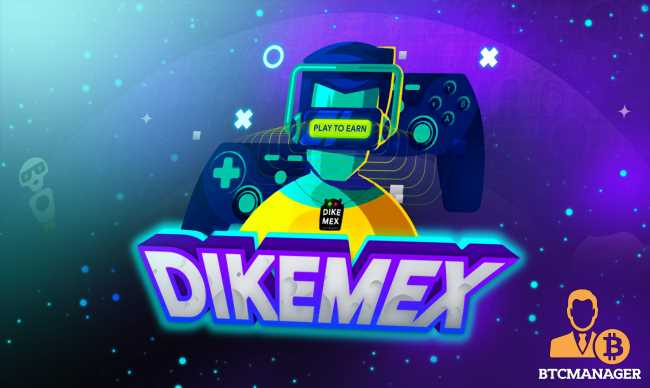 Dikemex (DIK) Network has announced the launch of its blockchain-based non-fungible tokens (NFTs) play-to-earn gaming ecosystem. Via the Dikemex platform, anyone can create, share and play games to earn rewards in DIK tokens and super rare digital collectibles.

Developed by a team of dedicated information technology veterans, Dikemex Network is a blockchain-based, end-to-end, scalable live streaming platform that enables users to focus on creating live video applications and much more.

With Dikemex, users can watch videos and earn DIK token rewards when they forward these video content to other users on the platform.

Per the Dikemex team, Dikemex Network is a very useful tool for video delivery platforms, as integrating it into their video delivery stack enables them to reduce costs, deepen engagement and boost revenue.

According to the Dikemex whitepaper, Dikemex Network enables support for Turing-complete smart contracts, making it a suitable platform for the development of decentralized applications with a vast array of use cases.

“Dikemex leverages smart contracts on the network that can allow item ownership to be fully digitized, innovative consumption-payment models, transparent royalty distribution, trustless crowdfunding and more. This provides an extra layer of economic and social interaction that complements the core functionality of video and data delivery, while significantly increasing platform engagement and user retention,” reads a portion of Dikemex whitepaper.

Since the crypto markets boom of 2017, non-fungible tokens (NFTs) have been growing in popularity, with the digital collectibles industry now worth billions of dollars.

Dikemex says it will aggressively use its own online media platform to promote its new NFT ecosystem and provide digital collectible trading services to members, thereby fostering the growth of its ecosystem.

The Dikemex ecosystem is powered by the DIK token. DIK is the governance token of the Dikemex protocol. Interestingly, unlike a vast array of blockchain projects, the team has made it clear that DIK has a fixed supply of just 11 billion and will never increase.

The team says DIK token will be used for on-chain operations such as payments, NFT exchange, live streaming, video sharing smart contracts fees, and more. Dikemex service relayers will earn DIK from other users’ support activities on the network.