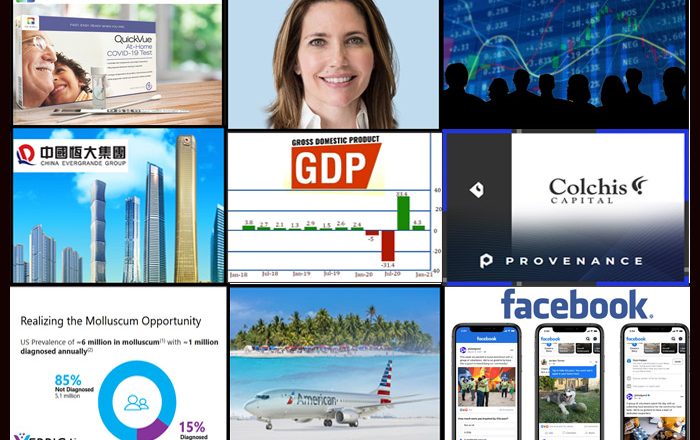 As we bid adieu to a historic year that impacted almost every realm of life and business in unprecedented dimensions, it is opportune to take stock of the best we remember for the year. Here is a snapshot of our widely followed stories of 2021 spanning politics, healthcare, economy, corporate, international business, technology, social media and more.

January: Evan Ryan Named As Biden’s Cabinet Secretary was one of the most read stories of 2021. We had comprehensively covered the U.S. Presidential elections and the key postings in the Biden-Harris team. The piece is a report on the appointment of Biden-Harris Transition’s Senior Advisor Evan Ryan as the incoming President’s Cabinet Secretary. Ryan, 50, is the wife of Biden’s Secretary of State-nominee Antony Blinken and has worked under two Democratic administrations.

January: Developments in the healthcare, biotechnology and biopharmaceutical sectors have been our niche areas of focus in news coverage, commentary and analysis. The story Pre-market Movers In Healthcare Sector: ADMP, FLDM, ATOS, AUPH, SENS… published on 22nd January is another story that got many positive comments. It carried detailed analysis of the reasons for the extraordinary pre-market movements in 14 scrips from among these sectors on that day.

February: The story Will Second Time Prove To Be Charm For Verrica’s YCANTH examined the prospects of Verrica Pharmaceuticals Inc. (VRCA) in the context of its second go-around with the FDA for the PDUFA date of its lead product candidate YCANTH. YCANTH was proposed for the treatment of molluscum contagiosum, a highly contagious viral skin disease that affects approximately six million people – primarily children – in the United States and for which there was no approved treatment. The story too topped the charts for the wide readership.

February: This stock alert caught the attention of many of our readers. “Virgin Galactic Slips On Delay In Spaceflight” alerted our readers to the fall in the prices of shares of Virgin Galactic to $36.62, from $42.24, as a technical snag delayed the rocket-powered spaceflight schedule to May. Shares of Virgin Galactic have fallen still further and closed trading on Thursday (January 6, 2022) at $11.78. Watch out for our timely stock alerts in pre-market, market hours and after-hours trading to get regular stock-price alerts on listed stocks.

March: U.S. Economy Unexpectedly Grows More Than Previously Estimated In Q4 that covered the 4.3 percent surge in the gross domestic product in the fourth quarter of 2020 also topped the viewership charts. The reading compared to the previously reported 4.1 percent jump. Economists had expected the pace of GDP growth to be unrevised. For region-wise periodic updates on the economy, and to scan through the latest Economic Calendar, Economic Scorecard etc., visit the Economy section of our website www.rttnews.com.

March: The story FDA Accelerates Efforts To Issue EUA For More COVID-19 Home Tests attracted eyeballs in the context of the massive spread of the Covid-19 disease and the demand for extending testing facilities. The granting of EUA for the Quidel Corp.’s QuickVue At-Home COVID-19 test was one example of the FDA working with test developers to bring important diagnostics to the public.

April: Facebook To Ask New Questions About Content You Find Valuable In News Feed was another popular story of 2021. It covered Facebook’s (since rebranded as Meta) efforts at a survey driven approach, to gauge the content people find valuable or not in their News Feed. News Feed uses thousands of signals to rank and arrange posts from friends, Groups and Pages one follows.

June: http://www.rttnews.com/story.aspx?id=3206186 covered Car-rental company Hertz Global Holdings Inc. emerging from bankruptcy. Hertz announced a new board of directors following a successful restructuring process. Hertz had filed for Chapter 11 for its U.S. operations in May, 2020 but its principal international operating regions including Europe, Australia and New Zealand were not included in the proceedings.

September: Behind Evergrande’s Fiasco captured the events behind the debt fiasco at China Evergrande, China’s second largest property business in terms of sales turnover. The Evergrande crisis triggered an endless debate on the perils of excessive debt, leveraging and the evergreening of a perilous financial position with fresh debt. Chinese regulators had introduced measures, particularly the “three red lines” framework to rein the debt binge in China’s realty businesses so as to avert a housing bubble and a disastrous bust. Evergrande responded to the forced deleveraging with discounts, non-core business spinoff as well as asset disposal, as the new rules practically precluded it from taking up any more debt. The issue is yet to be resolved fully.

September: The news report Regeneron: NIH Panel Recommends Use Of REGEN-COV In COVID-19 Outpatients At High Risk Of Progression tracks Regeneron Pharmaceuticals’ response to the newly updated National Institutes of Health COVID-19 Treatment Guidelines. The guidelines strongly recommend that REGEN-COV be used in non-hospitalized COVID-19 patients at high risk of clinical progression. The Guidelines Panel also recommended that REGEN-COV use should be considered for persons with mild-to-moderate COVID-19 who are hospitalized for a reason other than COVID-19 but who otherwise meet the EUA criteria. Subscribe to our Biotech Investor service for expert commentary on the biotech space.

October: Colchis Capital To Use Blockchain To Innovate Real Estate Financing was also one of our widely followed stories of the blockchain industry. The piece reported how alternative investment firm Colchis Capital was partnering with blockchain infrastructure firm Bison Trails to use Provenance blockchain to unlock new use cases for real estate investments. The story covered how Colchis was exploring blockchain technology for asset tokenization and was looking to bridge the gap between blockchain and industries that historically rely on traditional finance. Visit our website for regular commentary on the developments in blockchain technology and cryptocurrency markets.