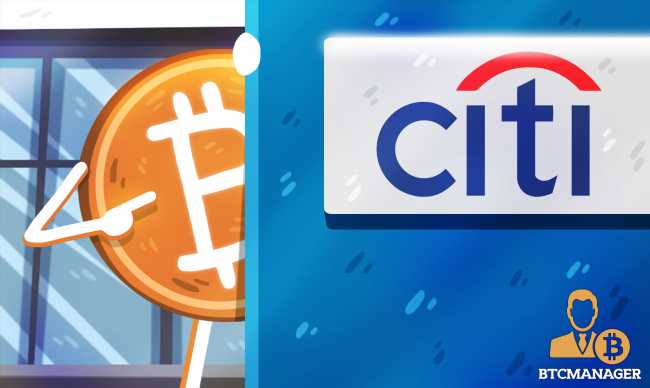 Another individual familiar with cryptocurrency derivatives markets noted that Citi is gathering a team to join a crypto-focused team in London. The individual also noted that the team would possibly win approval to commence trading CME bitcoin futures first and later bitcoin exchange-traded notes (ETNs).

Later they will move on to other products such as bitcoin exchange-traded notes.

A Citigroup spokesperson said that they are very thoughtful about their approach with the many questions around regulatory frameworks, supervisory expectations, and other factors.

At the moment, they are considering products like futures for some institutional clients, as these operate under solid regulatory frameworks.

The bank has observed an increased demand in the cryptocurrency space as bitcoin mounts a climb toward $50,000 again. Arcane Research wrote in a Tuesday newsletter that the fear is gone for now, and the market is optimistic.

On Monday, Bitcoin prices surged over $50,000 after weathering a crackdown by Chinese authorities on domestic cryptocurrency mining companies at the beginning of the year. Mainstream adoption by corporations and the wider public have been gathering pace.

If Citi gets the regulatory approval, they will join fellow megabank Goldman Sachs and Morgan Stanley, which launched their internal initiatives to assist their premium management clients in accessing the crypto market.

JPMorgan was the first major U.S. bank to give all its wealth-management clients the green light to access cryptocurrency funds.

Citigroup, one of the most significant banks in the U.S., holds some $23.7 trillion in assets under custody. The bank reported total revenues of $17.5 billion when it released its second-quarter 2021 results just recently.

According to a Financial Times report nL4N2MU1B8, the bank was weighing the option of providing cryptocurrency-related services in May.

Citigroup also launched a business unit in June that focuses on the cryptocurrency and blockchain space.

The bank has seen exciting new developments around crypto, tokenization, and other advances powered by blockchain technology, thus forming the Digital Assets Group.

Citi’s U.K. brokerage platform began offering clients access to ETH (-5.14%) ETNs in the previous crypto bull run in 2017. However, the demand for the products declined, and the bank set offerings aside after bitcoin’s price dropped in 2018.