Home » Bitcoin » More US States May Roll Out Cryptocurrency Regulations

More US States May Roll Out Cryptocurrency Regulations

Cryptocurrencies were originally meant to be stateless entities, not beholden to the legal frameworks of any state or country. Practical reality is different, however. Traction for cryptocurrencies has brought increased government censure and cynosure. Indifference and cynicism towards blockchain and virtual currency across the United States has given way to concern and grudging acceptance.

Up until last year, news publications routinely catalogued “friendly” and “hostile” states to cryptocurrencies. The sands have since shifted. There is growing realization that regulation (or even attention from regulators) is good because it establishes rules and order in an otherwise lawless jungle that provides free play to dubious actors and businesses. It also signals an intent to engage in dialogue with businesses in the crypto ecosystem. (See also: Bitcoin Regulation: A Necessary Evil.)

In the absence of a federal directive on cryptocurrencies, some states have taken matters into their own hands. A patchwork of old and new regulations is being used by states to wrap their heads around cryptocurrencies. But there are three broad aspects they are most concerned about: the use of cryptocurrencies as legal tender in business transactions (including taxation), imposing authority on operations of cryptocurrency exchanges as money transmitters, and the status of smart contracts and ethereum tokens. (See also: Bitcoin Government Regulations Around The World.)

Very few states have made progress on all three fronts. California and New York, which are both home to a large number of crypto businesses, are ahead of the pack. But others are quickly catching up. There are some unlikely contenders. For example, Wyoming has become one of the most progressive states as far as cryptocurrency and blockchain regulation is concerned. As is Arizona.

In contrast, Massachusetts is yet to take a stance on cryptocurrencies and blockchain. Similarly, Washington, a state that is home to a thriving tech scene, passed a bill in 2017 that requires cryptocurrency exchanges to maintain cash reserves equivalent to the transacted volume on their platform. This move is being construed as hostile.

As can be seen from the map, a vast majority of states are still to decide their stand vis-à-vis cryptocurrencies. The good news is that the attention from regulators has increased over the past year. Intense media scrutiny and attention is expected to further accelerate the move towards regulating virtual currencies. 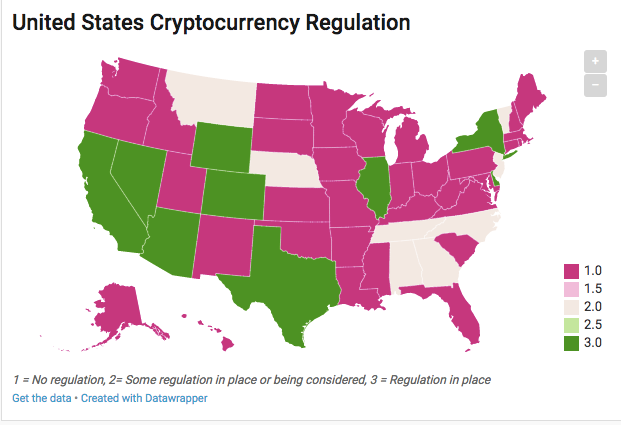