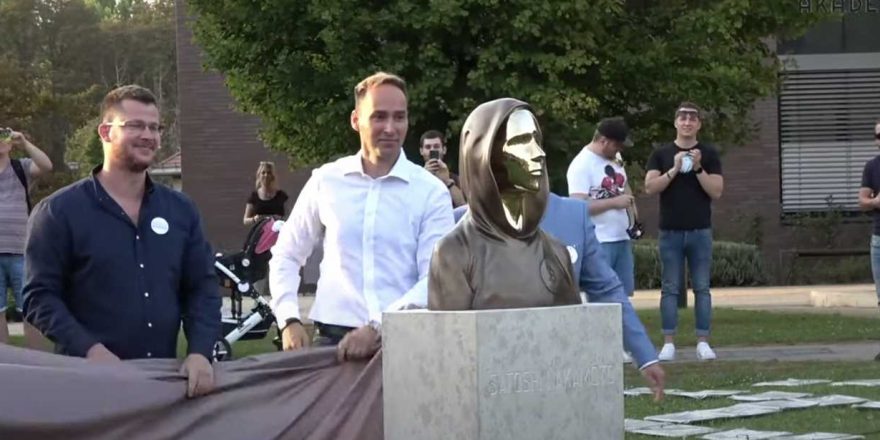 Satoshi Nakamoto has finally been unveiled and he’s a young man in his late twenties of a golden skin and very short hair.

The statue was erected by donations organized from the Blockchain Hungary Association and Blockchain Budapest with it located at the Graphisoft Park on the banks of the Danube, close to the Római-part.

From an angle as seen above, Nakamoto has a confident outwards exposure looking somewhat up with the reflective material being a mirror of sorts where you see your face when closer.

The opportunity has been missed however to imagine today’s ideal of man’s beauty or handsomeness, something like Michelangelo’s David.

Nakamoto instead is somewhat generic, perhaps to express the suggestion that he is all of us, but that all of us shouldn’t necessarily look blandly average. There’s no reason why instead the essence of average isn’t more pleasantly appealing.

Not least because Nakamoto is obviously not average. It is quite probable, for example, that his face doesn’t go up to a narrow skull, but to a broad forehead.

That detail isn’t irrelevant. Logically, and at the risk of reductive generalization, intelligence should reflect beauty especially for men because intelligence is quite useful in providing for offsprings.

So David of course has a broad forehead, not narrow like this Nakamoto who is also not neutral in expression, but with lips curled down. Why on earth would he be sad instead of perhaps even confidently arrogant because he knows he is right.

The hood obviously is here to suggest coder, or hacker, or anon, with the hood also being a symbol of Silicon Valley’s now corps founders, like Facebook’s Mark Zuckerberg famously often wearing it back then to show he is so powerful that he doesn’t have to wear a suit.

The hood is also the mark of wizards and more generally of the common people. Kings and their ‘officers’ don’t wear hoods.

But it has always been controversial because ‘scary’ or whatever, but here it looks more like an astronaut’s head cover so gives it all some sort of uplifting.

Overall however, you’d think imagining an anonymous man must be a most exciting endeavor for any living artist as it provides a modern opportunity to present the human form in its essence, an opportunity that clearly grabs attention as there were huge crowds, maybe 200 people or so, gathered to watch the statue.

That opportunity here has been used to present a somewhat effeminate man, if we may brutally say so, that doesn’t inspire except through decorations like the shape of the hood and the gold tone.

It’s not clear that’s quite what we want to tell our young. Nakamoto is a warrior, at least in spirit and if in spirit then there’s no reason why it shouldn’t be portrayed in physical appearance too.

He didn’t fight with a sword or gun, but something far more powerful. He fought with his conviction, perseverance, utter discipline, and fundamentally what must have been a tireless obsession to prove that what they said was impossible, he can build and has actually built.

Nakamoto has also shown the will to self-sacrifice as he has not quite taken credit or his deserved financial reward for coming up with this, as far as is known anyway.

So he is an exceptional man not the average. That ‘we are all Nakamoto’ is for the meme and a symbol that we all run the code, not for the man himself, and obviously there is a Nakamoto, there is someone that can be imagined.

A man in his late twenties or early thirties is what this statue has gotten right as far as reasonable guesses go as it is most probably not a woman and data suggests he was maybe a cramming student, perhaps PhD or who knows.

The latter would also make sense in as far as the previous generation, Xers, had decided all this was impossible, but obviously there are exceptions. However this is a task in imagining not fact setting which only Nakamoto himself can provide. Also young is maybe more expiring for the young but not necessarily as ultimately facts are the most inspiring if he ever cares to reveal them.

Within those constrains, an artist’s task would be to physically represent what a man going against fundamental air-like dogma with the newfound powers of coding, would look like.

His or her task would also be to communicate the skills and thus the wit and so the nature of someone with the foresight to use those coding powers to secure his untouchableness, which in this case he did by slipping no where as far as it concerns his identity.

Lazily that can be represented by a hood, but he is too young for a hood. Either he is old and wise and so has the hood, which is effectively the crown of the people. Or he is young and so not wise but arrogant in hubris and thus powerful confidence, but has the wit which presumably can only be shown by a cheeky smile or a smirk.

Basically Nakamoto is cool or should be cool because what he has done is super cool in executing what plenty said was impossible. That’s not average, and so any representation of him shouldn’t call to the uniform of average, but to the representation of man’s power if he chooses to yield it.

Nakamoto therefore shouldn’t be chained to the old symbolism of the priesthood, the hood, but to the ironically liberating chain of code which here can well be represented by a whistling young man swirling a chain on one hand in a ‘I don’t care’ way while communicating confidence.

Basically Jesus flocking the money changers out of the church, but modernly re-imagined and a lot more flashy, with a checkmate solution, and so not flocking but in a way that gives them competition beyond words.

That all said, this is the first statue of Nakamoto and we understand the presumably significant budgetary constrains.

In addition its aim is for the present foremost, to celebrate this whole new crypto world, and overall its a fairly decent statue which gets maybe 5 out of 10.

But statues and public representations do have value and power, so the public should perhaps start demanding more inspiring surroundings, both in regards to crypto but also more generally for tech or science or art, which kind of needs to be brought a bit to life as it servers a purpose of uplifting that is necessary for the heart.