The explosive growth of cryptocurrencies in the last year was accompanied by a corresponding increase in coin mining.

According to security firm Symantec, cryptocurrency mining was the biggest trend of 2017. “The surge in interest in this area was such that detections of coinminers on endpoint computers in 2017 surged by 8,500 percent,” the maker of antivirus software wrote in a blog post on its site. (See also: What is Bitcoin Mining?)

Coinminers are scripts to generate new coins. Typically, they are run on nodes that are connected to networks of computers responsible for this task. These are known as bitcoin mining farms. Some individuals also run bitcoin mining machines at home. Symantec’s statistics pertain to mining of cryptocurrencies on such systems. As cryptocurrencies became popular in the last year, bad actors within the cryptocurrency ecosystem began using the script to mine on end user’s computers without their permission. For example, a malware used to generate Monero, which is the most popular cryptocurrency used for mining coins on user computers, even made profits last year. 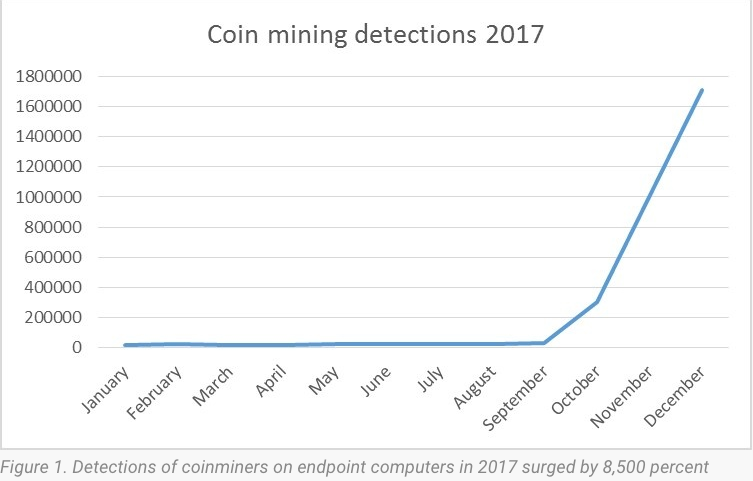 Not all instances of coinminer algorithm use are illegal, however. Online publication Salon unveiled a program this year that used coin mining to help offset advertising revenue shortfall. The publication’s pitch to users was to present coin mining as an alternative to ad blocking software, which has become popular with users in recent years. But it is not clear whether the initiative was a success. Coin mining is a CPU-intensive activity that slows down systems and could even crash them. (See also: Sites Are Now Using Your Computers To Mine Coins. It Could Be A Good Thing.)

Symantec’s post drew attention to the consequences of coinminers for organizations. According to the company, self-propagating coinminers or coin mining algorithms that spread through a network by replicating themselves on user machines could shut down corporate networks. If a majority of the network is based in the cloud, then it could increase overall electric usage (due to CPU-intensive activities) and increase overall maintenance costs for organizations.

The post’s authors also highlighted the consequences of coinminer algorithms on IoT devices. “We observed a 600 percent increase in overall attacks on IoT devices in 2017, showing that while they don’t make headlines like they did thanks to the Mirai botnet in 2016, they are still very much a target for cyber criminals,” the report states.