Home » Can Merkel Save Palestine? 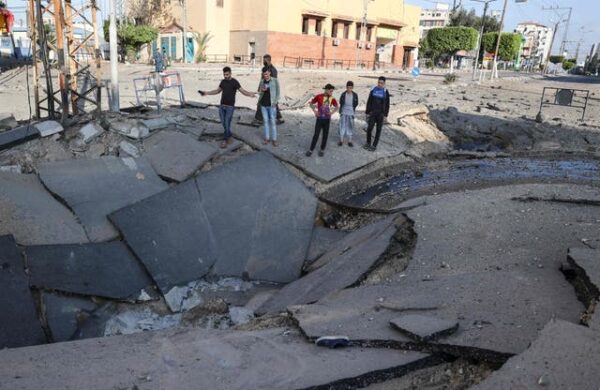 Can Merkel Save Palestine?

As two billion people across the world celebrate the equivalent of Christmas, bombs shower Palestine (pictured) after one of the holiest site in Islam was desecrated by what by international law is an invading force.

It is in many ways a sight we’ve all grown up with, and for millennials it is the cause of the theft of two decades beginning with the crushing of optimism and hope in 2001.

A repeat now that we mostly ended the vast majority of Arab wars, raises the question whether this can be allowed in this new time, whether in this generation’s watch, we can in any way tolerate brutalism.

Brutalism is an ideology of oppression by imprisoning imagination to the hopeless acceptance of visual presentation.

It is most overt in architecture, where any beauty or elaboration is stripped off, but perhaps unconsciously, or consciously, it presents itself especially in war politics where brutalism simply must be accepted.

The brutal pictures coming out of Gaza are no different than the brutalist soviet buildings which impose oppression in a way that falsely make you hopeless about changing any of it.

Falsely because there is something that can be done and maybe should be done to break that cage of brutalism, and so free imagination.

In particular, the Israeli army is apparently planning to invade Gaza. What if Gaza is ‘invaded’ instead by a muslim country, by Turkey in particular, and so we add some ornaments to our political buildings.

Turkey has called for a peacekeeping force, but why can’t it be a Turkish force? Presumably because that would be too risky to challenge Israel on their own. Not that they would necessarily lose, in a one to one they would probably win, but because the costs of course would be considerable if Israel would in this scenario be stupid enough to challenge Turkish troops.

So an international peacekeeping force would obviously be far more preferable, but the chances of it appear nill.

In a most disappointing statement President Joe Biden called on only one side to refrain, leaving Israel fully off the hook and so in effect, at least overtly, giving Israel the green light to repeat the same brutalism that they have for much of our life.

From UK, one can expect nothing. Dominic Raab, the foreign secretary, happens to be jewish. The bias was overt in his statement also calling for only Palestinians to stop doing things.

That’s most likely because both US and UK are complicit in the ongoing oppression of Palestinians, and they are complicit perhaps because they’re largely the cause of it. Sunk cost fallacy so being in full display, one can expect no change to come from these two as there hasn’t for nearly a century.

There is however another perhaps forgotten iron alliance, and without it there maybe can be no peace because there can be no balance.

Germany and Turkey lost a war, but they don’t have to keep losing forever. Germany in particular doesn’t have to take the brunt of refugees caused by this brutalist ideology. Turkey can go in as liberator and may as well be accepted as such because at least they wouldn’t bomb during eid.

Instead of asking for others to do things, therefore, perhaps it is time they take responsibility themselves for their own neighborhood and clip a belligerent aggressor that has been kicking people out of their homes.

Germany in short should give Turkey cover to go in as it is time this brutalism stops. Democratically there appears no chance for it to do so as Israelis have voted out their prime minister Benjamin Netanyahu three times and he still rules. In addition, the diplomatic success in arranging elections in Palestine are now showered with bombs.

The only solution is clearly troops in Palestine to protect the nation and to unequivocally declare independence, so forcing a solution instead of succumbing to the slow ethnic cleansing of Palestinians and the radicalization that comes from it which we had a very bitter taste in 2001 and afterwards hopefully until circa 2018.

The fate of Palestine therefore is in Germany’s hands. They, and not America, must act with their old iron ally, Turkey, and satisfy the demands of this generation to end this brutalism.

Not least because where our space is concerned, nationalism has been only bad news for bitcoin. It’s time therefore we fight nationalism everywhere and anywhere under the banner of liberalism, beginning perhaps with liberating Palestine.