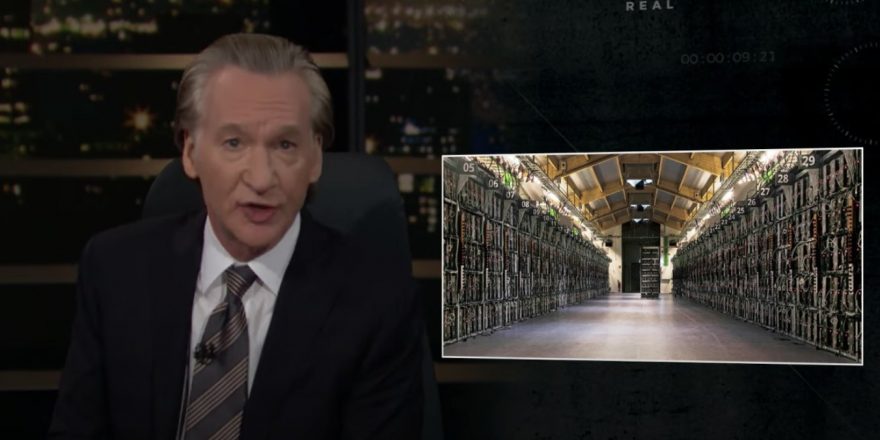 “There is a mania rising in the country these days about cryptocurrency and how the train is leaving the station, so you better get on.”

So says Bill Maher, one of the world’s best known comedian, in his show Real Time with Bill Maher.

The 65 year old confessed to having no clue about this bitcoin thing. “I’ve read articles about cryptocurrency, I’ve had it explained to me, and I still don’t get it,” the pre-internet grandpa said.

That didn’t stop him however from going on to critique, revealing in the process why he doesn’t get it. He doesn’t seem to understand finance.

“Apple stock is worth money because Apple makes thousand dollar phones… but Dogecoin… has no product.”

Dogecoin runs on a massive global meme factory as we all know and people are happy to buy these memes, but jokes aside, dogecoin itself is the product.

Apple stocks are an artificial paper creation that tries to keep account of profits or losses of apple products. The two don’t necessarily have to be related. A stock can hugely underperform or it can be vastly inflated due to speculation, but stocks themself are not a product, they a unit of account.

Bitcoin is also a unit of account, but one that is intended to measure all the other units of account. Like Apple stocks measures the profits or losses of Apple products, bitcoin is meant to measure just what an Apple stock is worth.

“We knew money had to originate from and be generated by something real somewhere. To which cryptocurrency says: no it doesn’t,” says Maher.

Maher is clearly a very smart man to get to where he is, so we’ll assume this misunderstanding is what led to his wrong conclusion, instead of assuming that he understands perfectly fine he is misleading and is doing so perhaps because the current fake money system has served him fine.

Money of course has to come from something real. What is that thing where the dollar is concerned? It used to be gold. Now there is a political system that includes a FED committee with the chair appointed by the President which is very tied to the commercial banking system and in combination they decide just what is the value of money.

Money is their product because money is a product. Not like phones, but what makes the exchange of phones possible. It’s an ‘artificial’ product like Apple stocks. Instead of measuring only the profits and losses of a company, it measures the entire economy.

Banks of course have money as their product and banks tend to have the biggest skyscrapers because money is of course the most lucrative product of all.

If money is a product, albeit an intangible one but a very real product nonetheless because without it there’s no advanced means of exchange, then there can be competition between different money products.

Both bitcoin and fiat are money products, as is Dogecoin or ethereum. The market cap of the dollar is difficult to estimate, but if we take M4 money supply we probably get to quadrillions.

Bitcoin is a trillion currently, and when you compare it to Apple stocks, it doesn’t make sense, but when you realize that money is what underpins the value or the number of an Apple stock – and bitcoin is a type of money – then it hopefully begins to make sense.

Here then one can make many arguments as to why the dollar is better money, or the euro, or more generally why at will money, fiat money, is better. One can even argue that bitcoin is not money at all, that its qualities are inferior, that dogecoin is maybe better, or that all cryptos are worse, or that there should be no competition at all in money, it’s the kings privilege. And after being defeated in all arguments then close it by saying the government will ban it, met with a no u.

That would be an actual debate. Saying that bitcoin is not real however, is not going to persuade anyone with an IQ above 100, and since those that have money tend to have an even higher IQ, such statement would be only fooling oneself.

Not least because Maher himself reveals how bitcoin is more real than any money in existence.

“What is real, is the unfathomable amount of electricity that those massive supercomputers suck up for their mining… I mean cars are bad for the climate, but they take you somewhere,” Maher says.

That energy is used to ensure that bitcoin can’t be faked or inflated at will. That the unit of account isn’t changed by fiat, whether openly or in secret, by some men in some dark room somewhere. That one bitcoin is one bitcoin.

It does a very important task therefore, but of course the clean use of energy is a priority for the bitcoin mining industry, as for many other industries, and since bitcoiners tend to be smart, they are probably more demanding of a clean environment than Maher who private jets around the world with his billionaire buddies.

That’s why Elon Musk, who single handedly is doing more for the environment than anyone, is a bitcoiner. This industry depends on clean energy and therefore is probably the main industry that will drive clean energy production forward.

Maher’s premise however is that bitcoin is not real, and yet it is using all this energy. That it shouldn’t use energy at all, that bitcoin should just go away.

But bitcoin is real. Maher’s opinion is fake. Bitcoin uses the energy mining model to equitably distribute the coins, starting from zero on January 3rd 2009.

Some suggest other models, like Proof of Stake, but from a money product perspective that can have weaknesses in that one can’t access crypto directly from the network, has to buy it from someone else.

Ethereum plans to adopt that model potentially as soon as later this year, but after a period of mining distribution.

What models are better is obviously a worthy argument, but the suggestion that something uses energy and therefore is bad comes across as deranged.

We need to harness energy, in a clean way but if we are to become a multi-planetary species, we need some significant advances in energy production.

Bitcoin provides the raw incentive for significant brain power to be utilized to tackle this most challenging task, and therefore it may well produce significant innovation in years to come.

Because ultimately this challenge will only be solved by innovation. Not necessarily anything radical, but putting solar roofs on cars as Tesla may well do, can be a significant step towards cleaner air.

Utilizing hydro-power and increasing efficiency there, improving on solar panels both on cost and power production, experimenting with those windmills to see what might work, and perhaps even inventing something new in the process, can all be incremental steps that do far more for the environment than a million government policy papers or Maher pretensions of caring about the environment.

Overall however, the grandpa segment despite misleading the boomers still makes bitcoin look like a futuristic advancement that may well have some of them interested because although Maher got a lot wrong, he may be right about that train getting off.