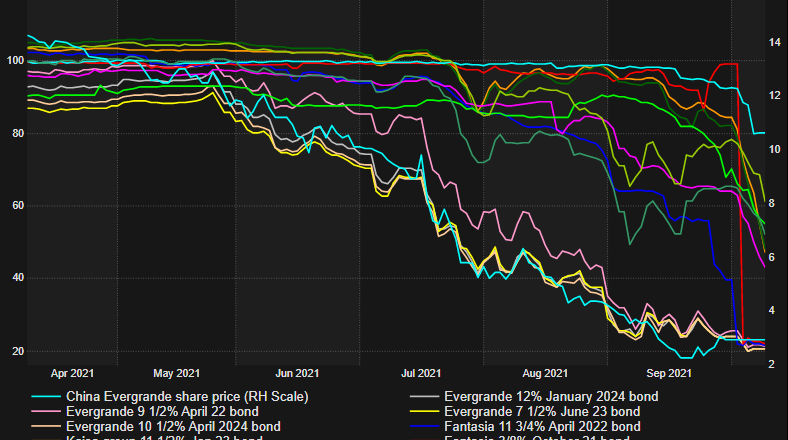 Ethereum has also jumped to above $3,700 with it significantly lagging behind bitcoin as the latter seemingly takes the show.

What exactly is driving it is not clear. Some say the eight years and one trillion dollars delayed bitcoin ETF is what might explain the price rise, but bitcoin began rising before any suggestion of its approval.

Some say it might be a hedge of sorts for gas and oil rising prices, with the continued crisis in China potentially being another explenation.

The bond market crash there is seemingly expanding with S&P Global Ratings downgrading Greenland Holdings, one of China’s biggest property developer that has built some of the tallest buildings.

They have a yearly revenue of circa $22 billion and total assets of $114 billion, making them the biggest after Evergrande to come into the spotlight.

“We see a risk that a disorderly correction in the property market could cause sharp price declines, hitting the personal wealth of homeowners.

Such an event could also contribute to large-scale losses by investors in wealth management products, and the contractors and service firms that support the developers.”

Bonds issued by developers including Shanghai Shimao, China Aoyuan Group, and Country Garden Properties fell between 1.6% and 7.4% in a continued market rout.

All these are new names as concerns expand much beyond Evergrande, with stocks in China remaining in destress while elsewhere they’re green for once.

Just how much this bond crisis is affecting bitcoin is not clear as crypto data from China are now sparse but by some estimates about $20 billion in bitcoin went from mainland China to global exchanges in the first half of 2021.

That would be based on a lot of guess work you’d think, especially if cryptonians in China are now regularly using VPNs, but it may be the sort of data that goes into informing policy there and it is a clear indicator that people in China keep on bitcoining.