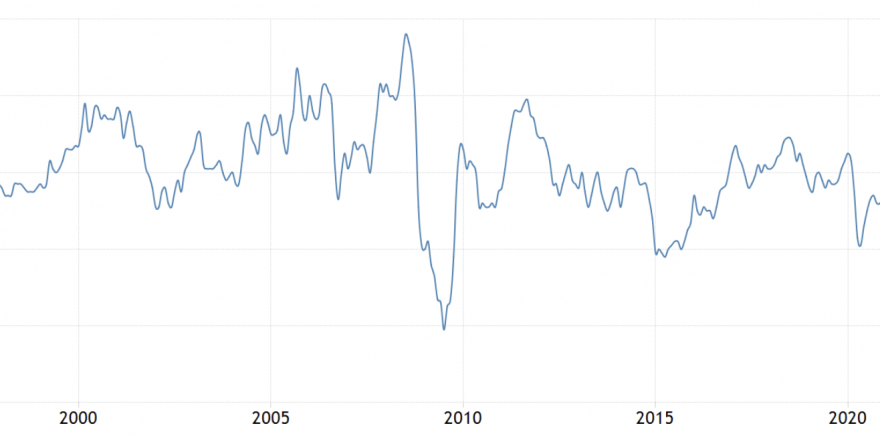 Inflation is rising at the fastest pace since 2008 according to the latest data by the U.S. Bureau of Labor Statistics. They say:

“The Consumer Price Index for All Urban Consumers (CPI-U) increased 0.9 percent in June… This was the largest 1-month change since June 2008 when the index rose 1.0 percent.

Over the last 12 months, the all items index increased 5.4 percent before seasonal adjustment; this was the largest 12-month increase since a 5.4-percent increase for the period ending August 2008.”

The 0.9% month on month increase is higher than analysts’ expectations of 0.5% with this bringing to the forefront the question of US monetary tightening just as China loosens their policy.

“We forecast that US headline inflation will stay above 4% through until Q1 22 with core inflation unlikely to get below 3% until the summer of next year,” James Knightley, the Chief International Economist at ING says. “We also expect the strong growth story to continue and with workers remaining in short supply, we see further wage pressure.”

The biggest rise was in used cars and trucks which saw a jump of 10% over last month, followed by oil rising 2.9% and gasoline at 2.5%.

A chip shortage due to last year’s disruption has led to a reduction in new car supplies, with the second hand market so seeing a rise in substitute demand.

Oil has more than doubled last year from a low of $35 to $75, contributing to a rise in prices with food items seeing a 0.8% rise over last month.

The dollar strength index has increased since June from 90 to 92.5 with a 0.3 jump seen today following the release of the data.

Dow Jones fell slightly by -0.12% with FTSE closing earlier at -0.01% while bitcoin has dropped by close to 2% even as inflation rises.

Will Powell Bear the Bull?

A big reason for a significant difference between American and European inflation, where it stands at 2%, might be the helicopter money during both Trump and Biden whereby some $3,000 was sent directly to every American bank account, within and outside USA.

Now that economies are opening up, you’d expect helicopter money to reflect on inflation, but the big question is whether this might send Fed into a panicky response by raising rates too fast.

That’s to be seen, yet what is becoming somewhat clear is that we are in a new economy that has seen China show a record rate of growth at nearly 20% for the first quarter of this year.

That pent up demand was to be expected and if the economy does roar back, that just means the ‘cancelling’ during 2020 where economic activity was replaced with government support has worked to effectively cancel 2020 in economic terms.

Thus current stats are not a surprise, with more quarters needed to get a fuller analysis of the transition, and thus a better understanding of whether we do really have a new economy or a cat bounce.

You’d think the latter is more likely due to pent up demand, but now that banks have lended and lended printed out of nothing money, they may well use these stats to close the tap. However for once they could bear with the bull and let it overshoot until a tightening up is not quite felt.

The latter could be a smarter strategy as it would take into account a systemic change exemplified by the latest from the Economist which says “America’s war in Afghanistan is ending in crushing defeat.”

The raw materials and spending during a state of war are incomparable to its effects on sentiment. So if this chapter of two decades is closing, you might expect a sense of optimism which should translate into economic productivity and dynamism.

Fed thus should hold its horses and let the main street party begin, and do what it thinks it should when no one cares, when the economy is booming and it can handle a cautious change.

Instead of doing what it has always done, putting a wall in-front of a fast moving train and causing a train wreck as it very much risks doing by tightening when we’ve hardly have had even one decade of main street boom since the 90s.

It should thus reward the sacrifices made during the past two decades and give the millennials the roaring 20s, and so let the bull run for once.