Home » Bitcoin » Bitcoin: China is taking blind shots but they are meeting the target

Bitcoin: China is taking blind shots but they are meeting the target

With October starting off on a bang-on bearish outbreak, Bitcoin dropped down to $10,380 from $10,940 in a gap of 12 hours. While the recovery has been commendable at press time, a prominent on-chain analyst suggested that there was more than what meets the eye in the Bitcoin space. 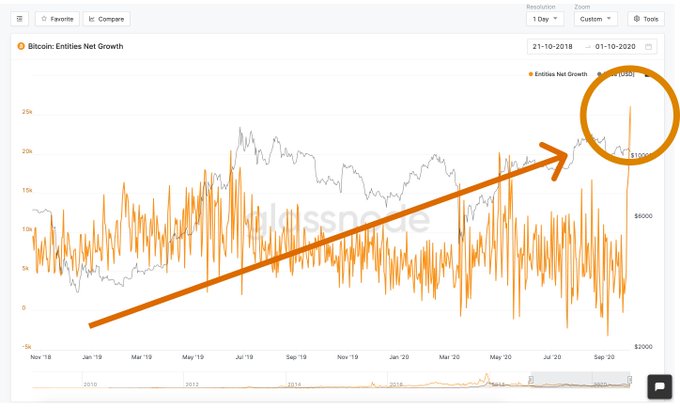 In a tweet thread released by Cole Garner, the analyst indicated that Bitcoin addresses witnessed a major spike in the chart over last week. With volumes preceding the price during the period, he stated that the usual figure of 5-10k BTC addresses/day, peaked a new high at 22k addresses last week, picturing a new high over the past 2 years.

While any uncanny increase in terms of BTC addresses, it was speculated that it might have been due to China’s timely intervention.

A report which seemingly missed everyone’s attention, China Central Television (CCTV) released a 3-minute clip towards the end of September, which highlighted that digital assets have rocketed by 70% in 2020.

Dovey Wan, a prominent crypto advocate, and Founding Partner at Primitive crypto also opined on the fact that it was a collective effort by the Chinese media to promote crypto’s 2020 development. She went as far as to state that it was a ‘rare coordinated effort.’

So, what does it all mean then?

Taking a shot in the dark, it all makes sense from an economic point of view, that Bitcoin’s rise in prominence will help China as well. Take China’s dominance in Bitcoin mining. With the rise in value for Bitcoin, BTC is indirectly China’s golden goose or for a finesse term, a national treasure.

But isn’t China suppose to be an anti-Bitcoin state?

On paper, yes. Considering the country is putting all its eggs in the basket with its DCEP, China’s objective is to promote its digital currency from a long-term prespective.

But they are taking the shots from Bitcoin’s shoulder.

It isn’t far-fetched to state that Bitcoin‘s huge selling pressure over the past week might have been absorbed by China’s retail and hence Bitcoin survives a massive drop.

Where does DCEP fit in here?

It fits in the long-term picture. If Bitcoin’s value rises in the next few months, and China can collectively promote that DCEP is a better form of a digital asset than the already rising Bitcoin, it is creating a situation where DCEP might come across as the best within the best. Hence, for China, a Bitcoin bull-run plays into the game of internationalizing its digital currency.

While a lot has to happen before all the pieces fall in place, the plan might be in motion already for China, and for Bitcoin.