Peter Thiel, the billionaire founder of Palantir and co-founder of PayPal, is doubling down on Bitcoin.

Peter Thiel: Bitcoin Is The “Most Honest Market”

Bitcoin has climbed back past $60K after its early 2021 parabolic run slowed. The bitcoin price has added 2.79 percent over the last 24 hours, taking it within touching distance of its all-time highs. BTC hit $64,490 on Tuesday — just shy of the 64,804 high set in April. 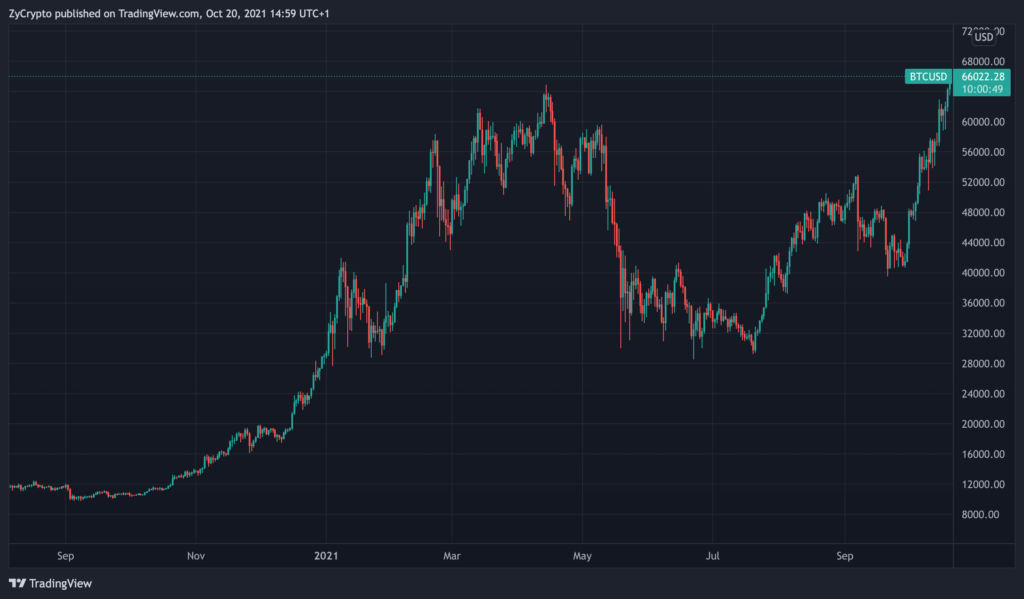 Thiel claimed that the world’s largest cryptocurrency by market cap topping the $60,000 mark was a very optimistic signal.

“I don’t know that you should put all your money into bitcoin at $60,000 a bitcoin right now. But surely the fact that it is at $60,000 is an extremely hopeful sign,” Thiel said recently during a conference hosted by the Stanford Federalist Society.

Bitcoin’s fresh rally comes as the first-ever bitcoin-linked exchange-traded fund (ETF) is greenlighted in the United States. The ProShares Bitcoin Strategy Fund launched on the New York Stock Exchange under the ticker BITO with an opening price of $40.88. The bitcoin futures-based ETF registered over $1 billion of trading volume on its first day, making it the largest in terms of “natural” volume.

The venture capitalist went on to describe bitcoin as the “most honest market” in the U.S. He touted the crypto’s latest price rise as the “canary in the coal mine”, which might suggest that the current “decrepit” regime is on the verge of exploding.

“It’s the canary in the coal mine. It’s the most honest market we have in the country, and it’s telling us that this decrepit regime is just about to blow up.”

Thiel, an outspoken Silicon Valley supporter of former US President Donald Trump, harbors the opinion that the Biden administration is shaping up as an absolute “catastrophe”.

Thiel has been known for his interest in the crypto space. His billion-dollar big data analytics company Palantir already accepts bitcoin as a payment option. Moreover, he earlier declared that Bitcoin could become a financial weapon for China against the United States. Thiel has also opened a Bitcoin mining facility in West Texas.