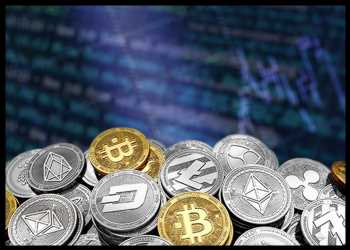 In a few hours from now, we will bid farewell to the third quarter of 2021, a quarter that witnessed a whipsawing crypto market amidst multiple events like global market sell-off, regulatory crackdown, stimulus tapering in the U.S., cryptocurrency heist, Bitcoin’s legal tender debut etc. Debates and projections on the prospective price trajectory of cryptocurrencies continue to rage alongside a price momentum, tapered and tempered by the recent bouts of extreme volatility.

Despite the recent extreme volatility, since our last review, the top ranks in terms of market capitalization of coins, sourced from coinmarketcap.com does not reveal any change in constituents in the top-15 category. However, Litecoin (LTC) has regained rank 11 relegating Algorand (ALGO) to the 12th spot. Given the fact that the difference in market capitalization between these two coins is just $0.58 billion, the tussle is likely to continue in the days to come.

The quarterly performance of the top-15 coins reveals three-digit price gains in four coins viz Avalanche (AVAX) that rallied 442 percent, Terra (LUNA) that gained 440 percent, Solana (SOL) that added 282 percent and Cosmos (ATOM) that strengthened 192 percent. Contrast it with Gold that shed 3 percent, Brent crude that gained 3 percent, Nasdaq 100 that moved up 1.36 percent during the same period, for lessons in “How to see the coins despite its volatility.”

Of the above-mentioned top-15 ranked coins, only Terra (Luna) is yielding positive returns more of more than 1 percent over a seven day- horizon, with a gain of 7.29 percent amidst the Terra blockchain’s upgrade, transitioning from the Columbus 4 to the Columbus 5 version. The Columbus 5 upgrade is considered significant due to the expected integration with the Inter Blockchain Communication (IBC) protocol, increase in throughput by up to 100x and the introduction of Ozone Insurance protection against any potential exploits.

In the wider crypto universe, a quick scan through the remaining coins in the top-100 according to market capitalization as per coinmarketcap.com, reveals that two coins are witnessing extraordinary price momentum over a seven-day horizon. COTI(COTI) ranked 64 has gained 44 percent, and Centrifuge (CFG) ranked 100 has gained 96 percent.

According to COTI’s technical whitepaper “The Trustchain Consensus”, COTI, or Currency Of The Internet, is a decentralized, high performance cryptocurrency ecosystem optimized for creating digital payment networks and stable coins. COTI’s vision is to empower users to freely exchange value as simply as information is exchanged on the Internet.

Centrifuge is a decentralized asset financing protocol that connects decentralized finance (DeFi) with real-world assets while trying to lower the cost of capital for small and mid-size enterprises and provide investors with a stable source of income.

The recent instances of extreme volatility as well as the resilience it helped induce is likely the stand the crypto market in good stead in the days to come. What is necessary is to sift through the space and identify the cryptocurrencies that meaningfully blend technological superiority, scalability, security, decentralization, and usefulness. Demand would soon follow to prop it up on the investors’ radars.