Another week has passed us by and Chainlink continues to remain consistent in the market. Shying away from any kind of explosive movement, LINK has surprisingly maintained a steady bullish decorum. First, the crypto-asset consolidated above its immediate support at $8.30, then a position above $9.60 was attained, and now, it is comfortably oscillating above the $10.66-level.

One aspect that has remained common between its bullish rally in July and its present-day performance is its low-correlation with Bitcoin. It did not replicate BTC’s short-rally then, neither is it replicating BTC’s strong movement right now.

While this particular trait with BTC can be considered disadvantageous during a rally, Chainlink seemed to be feeding on the support of its community. That, for one, has been very consistent.

LINK Marines and their Accumulation Activity 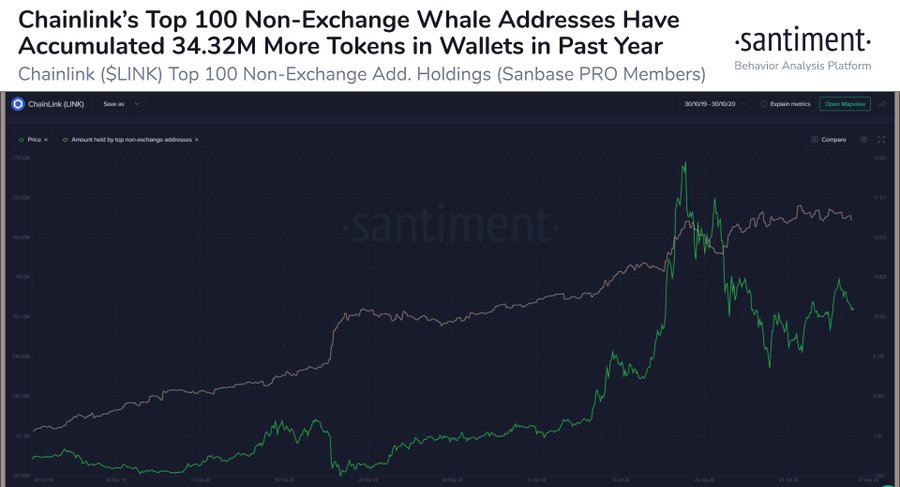 While the enthusiasm of LINK Marines was considered spontaneous and short-lived by the rest of the community in July, the attached chart begs to differ. Chainlink’s top 100-non exchange whales have steadily accumulated LINK tokens since last year, and the trend continued after its drop in September as well. In a recent tweet, Santiment noted,

“LINK‘s offline increase in tokens at this rate truly shows confidence in the asset from those with most at stake.”

While high whale accumulation is still non-ideal for LINK, the aggressiveness depicted by top LINK traders also points to a level of trust in its future valuation.

LINK’s gutsy recovery from $8.30, a price level that was 60% from the top, was recognized by these traders and right now, they feel there is a whiff of another rally soon. In fact, popular crypto-trader Scott Melker shared the same sentiment too.

The attached LINK chart is paired with BTC and it is currently re-testing both the horizontal and ascending support levels. While a likely scenario with the collective trend is bullish, a bearish flip can take place as well. However, the same is unlikely to waver LINK’s market sentiment.

Unless Chainlink falls behind major altcoins on the chart, it will remain a pre-dominant bull, at least during the next bullish rally.

Additionally, Chainlink is making strides elsewhere too after successful integration between Chainlink oracles and Agoric smart contract platform was announced. Earlier last week, Solve.Care entered into a collaboration with Chainlink to deliver real-world data in the Healthcare industry with the help of blockchain.

While such implementations do not impact LINK’s price directly, positive word-to-mouth development will pay long-term dividends.