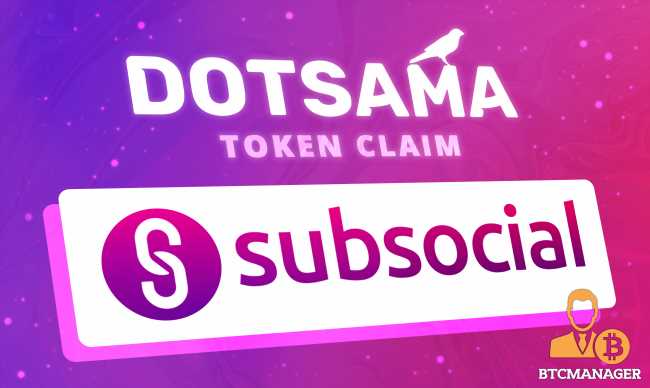 Subsocial Set to Launch the 3rd Dotsama Token Claim Round

The eligibility for participation in this token claim round is based on wallet snapshots taken by Subsocial on April 15th and May 21st. Dot and Kusama token holders who held 1 DOT or 0.1 KSM during both snapshots are eligible to participate in the upcoming round.

The other eligible participants are contributors to the winning projects in the Kusama crowdloans (Karura, Moonbeam, Khala, Shiden, Bifrost, KILT, Basilisk, and Calamari). However, an account must have contributed through Polkadot.js before September 24th.

Eligible participants will receive Subsocial’s native token SUB, with the maximum capped at 100 tokens for each participating account. This native token powers the Subsocial decentralized social networks and marketplaces platform.

Ideally, SUB will enable token holders to interact with the Subsocial network in various ways. These include creating a space, making posts, interacting with other network users and voting on posts.

Subsocial launched the Dotsama token claim as an initiative to reward the early adopters of the substrate network. The goal is to distribute 1,000,000 SUB tokens (1% of the total supply) to active Dot and Kusama users.

There have been successful two rounds, with the first launching on September 25th while the second round was held on October 7th. In both rounds, Subsocial distributed 250,000 SUB tokens to 2,500 accounts on a first-come, first-serve basis.

The Dotsama token claim also features a vesting period where 90 tokens are vested for over 3-6 months while the remaining 10 tokens can be claimed immediately. Subsocial will transfer the claimed tokens from the current operational beta network to the mainnet once launched.

Notably, there will be another token claim round to finalize the distribution of the 1,000,000 SUB tokens. The project has outlined more details on the token claiming process on their FAQ documentation.