Lisk [LSK] development update, Testnet migration and a MainNet in the future 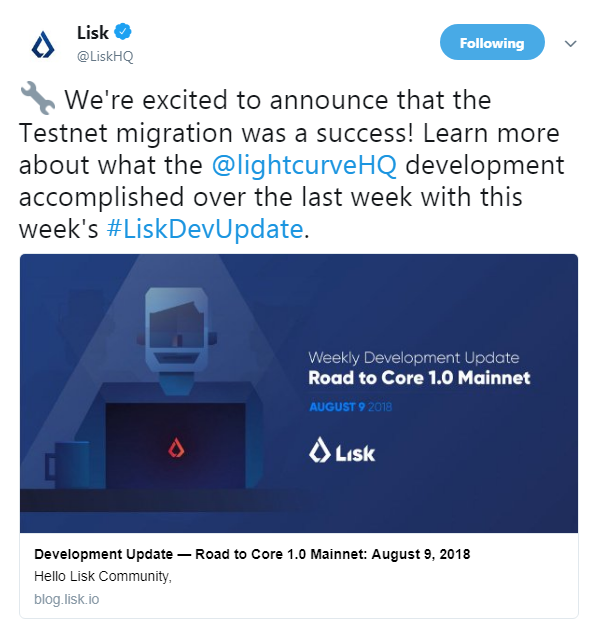 Lisk. on their official blog, outlined the developments that had occurred over the past week. The development team’s primary focus was on testing Lisk Core 1.0.0-rc.2. The beta version [the second release candidate] was tagged as Pre-release when it was published on GitHub.

The development team has confirmed that Lisk Elements 1.0.0, the general purpose JavaScript library for Lisk was released a couple of days back. The library is said to have been integrated into all of Lisk’s products with the inclusion of Lisk Core 1.0.0-RC.2.

To make certain that all of Lisk’s products are being appropriately aligned with each other, the team has upgraded to the latest version of the software. The development team further affirmed that they were able to fix a test that was previously detected to have been failing. This was the final action that was taken before the definite release of the Testnet was made.

Advancements made in the upcoming release of Lisk Core 1.2.0

The Lisk team have stated that although Lisk Core 1.1.0. is just a minor release, the modifications made to it are momentous. The team has also decided to lengthen the development phase of this version of Lisk Core. At the moment, the release has a total of 7 pull requests [Informs about the updates that are pushed to a GitHub repository] which are pending review.

Lisk has further acknowledged that users will be able to track the advancements made in the release on their GitHub. The team will review the status of their Testnet during the week to ensure that the network will continue to be stable. If the team is unable to identify any new issues with the Testnet Network within the time frame, they have assured users of a Mainnet migration height announcement within the next week.

“No SDK? LOL no different than last year. How about rebranding?”

“How long will it stay in Testnet?”

” SDK when? people getting tired of waiting.”