Ethereum has been firmly guiding altcoins throughout the past few days and weeks, with smaller tokens closely following in its footsteps.

Although the past week has been incredibly bullish for altcoins, Bitcoin’s ongoing push past $16,000 is once against sucking the oxygen out of the room and causing many to see slight retraces.

ETH is also underperforming BTC, trading below its daily high while BTC rallies past $16,000.

Until Ethereum can match Bitcoin’s momentum and surge past $500, there’s a strong possibility that the aggregated crypto market will continue facing some slight weakness.

Ethereum Struggles to Rally Alongside Bitcoin; Striking a Blow to Altcoins

Most major altcoins are trading down from their daily highs, which this descent coming about due to Ethereum’s underperformance of Bitcoin.

As seen on multiple occasions throughout the past few weeks, altcoins tend to drift lower as Bitcoin is rallying and gain momentum once it enters a consolidation phase.

Unless Ethereum can surge past $500 in the near-term, there’s a strong possibility that this trend will persist.

While comparing the market cap of altcoins to that of Bitcoin, one analyst noted that there’s a good chance these tokens will face continued weakness in the near-term.

He added that Ethereum’s underperformance would contribute to this weakness.

“We have had a few good days on ALTS and ETH but ALTS / BTC chart still looks horrible. Only looking for quick in-and-outs before ‘yearly’ is retaken,” he said. 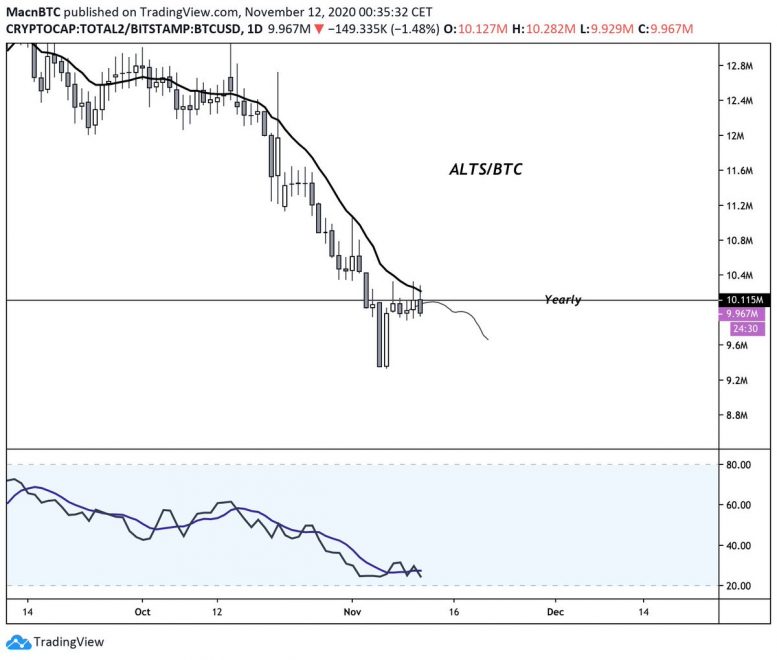 How Ethereum trends next will likely play a massive role in figuring out where altcoins will trend in the near-term.

Any continued weakness seen by ETH could strike a lethal blow to these tokens.